Which One is Better: AVI vs. WMV

The emergence of internet technology opened wider doors for communication. People now manage to send quick responses to messages. Moreover, it is easy to share information in different forms as per your preferences. Multimedia in the form of video carries the day. However, videos can be bulky, consuming more space, and prolonged uploading time. In order to save storage space and uploading time, some lossy and compressed formats come into being, while there are also some formats that keep the video lossless. It's wise to choose suitable formats for various purposes.

That's the reason for introducing different formats, like AVI and WMV, in this post. These two video formats will be compared in terms of popularity, compression rate, and uses, among other qualities. Then, a tutorial on converting between those two formats will also be offered to help you get the audio file you need.

What is An AVI File?

AVI stands for "Audio Video Interleave" and is famous for sending visual files. Microsoft first created it way back in 1992 to produce quality files for the Windows operating system. However, it currently cuts across the board and supports all platforms, including various media players. It works perfectly in synchronizing playback videos and audios as it harbors a container for both video and audio files. Likewise, it's an open-source format and enables users to edit their works easily.

What is A WMV File?

WMV format, also known as Windows Media Video format, is majorly compressed more extensive videos into smaller files. This, in turn, enables a better streaming mechanism of videos online and file sharing. However, the WMV format is not open-source hence not a good choice for editing purposes. The encoding and decoding only work in a limited code and can't be played on all platforms. Some WMV videos downloaded from paid video services usually come with DRM protection, making them only compatible with specific devices.

The Comparison of AVI vs. WMV

AVI format is widely used for short movies, promos, and advertisements due to its compression capabilities. The file format does not require a particular hardware device or software app to run it so that many users can easily open AVI files. On the other hand, WMV is ideal for streaming videos over the internet as it contains smaller storage spaces. It is best to attach a video to an email and work via Google Drive.

AVI format is uncompressed, requiring more hard disk space for its files. An hour of AVI data in 352X288 resolution will need a hard disk space of 33GB. AVI also has the highest quality due to its uncompressed nature. On the other hand, WMV is compressed files, making them compact for use in smaller chunks of files. WMV videos are also lossless so that the video quality remains the same after file compression.

There is a variation when considering AVI vs. WMV encoding method. WMV uses Microsoft's Advanced Systems Format (ASF) container to encapsulate the file's encoded media. While AVI format is the standard video format for Windows, it uses a variety of codecs like XviD and DivX, then saves files in a multimedia container.

AVI has a better video quality and performance even though it harbors larger file sizes. For WMV, the output quality is not as good as AVI, and it is immensely compressed into smaller sizes, resulting in loss of quality from the original file.

WMV does not enjoy a high compatibility rate due to its inflexibility in the codec. On the contrary, AVI has built-in support in all Microsoft's Windows platforms, and the format is an open-source file highly supported by other major platforms.

AVI stands as a better choice to ease your editing process as this format is widely compatible with various video editing apps. WMV is closed-source and cannot be manipulated, making it non-effective for editing.

How to Convert AVI to WMV/WMV to AVI

According to the comparison above, you may find one of those formats is precisely the one you need. But how to get the video files you want? The most convenient way is to convert your source videos into the appropriate format using a video converter, such as EaseUS Video Converter.

This video converting software is famous for the significant number of formats it supports, and you can use it to process up to 1000 types of video and audio files. In addition to the standard video-to-video conversion, such as WMV to AVI, this software is able to convert videos to audio files as well as turn audio to video. It saves you a lot of time in the converting process as it supports GPU acceleration and batch conversion. With those functions, you will get the desired videos as soon as possible.

If you want to convert video files without losing quality, this software is the go-to choice. Click the button to download it.

Here is a tutorial on converting your videos with EaseUS Video Converter. You can follow the steps to get the videos.

Open EaseUS Video Converter. Click "Video Converter" > "Choose Files" to import videos. If you have several files in a folder, you can directly import the folder by clicking the down arrow icon next to the plus icon and selecting "Add Folder".

Click "Settings" to select the output format, and your desired quality and resolution. 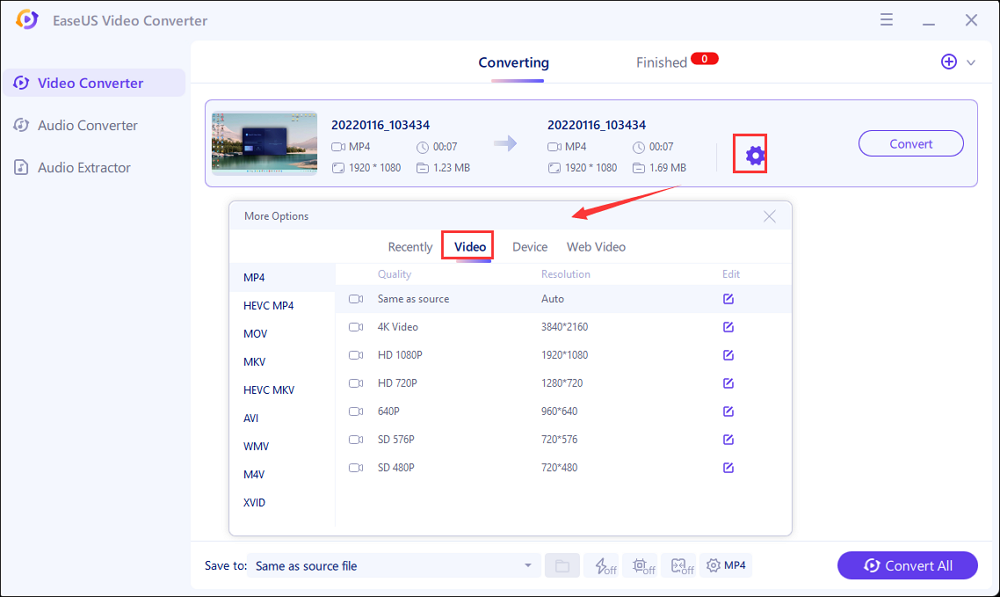 For advanced settings, you can click "Edit" to change the output file's parameters or file name. 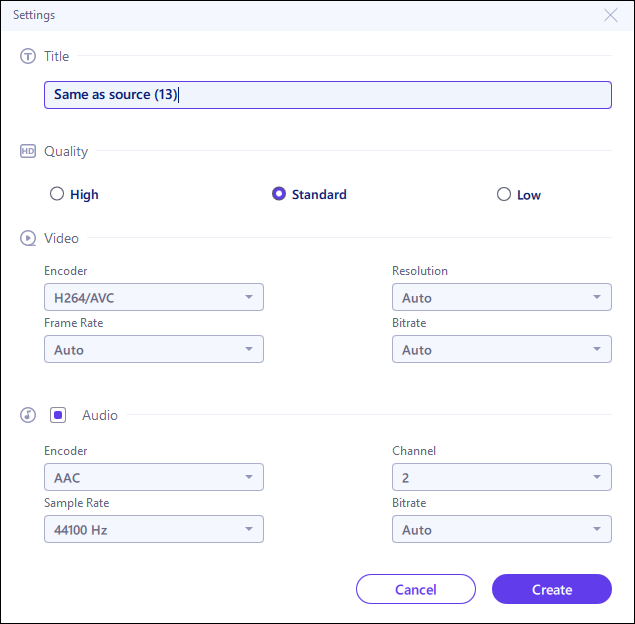 Go back to the main interface, you can change the saving path by clicking the down arrow icon at the bottom. Then you can click "Convert" or "Convert All" to start your video conversion task.

Once done, click "Finished" to view your converted files. Here you can play, rename, or delete your output files flexibly. 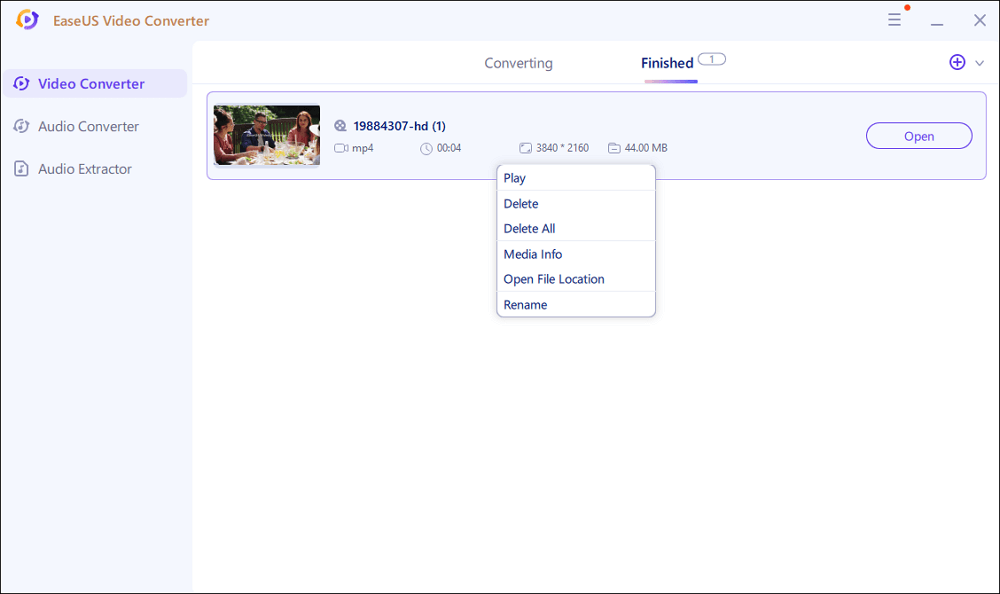 This post compared two of the popular video format, WMV vs. AVI, in detail. As AVI is widely supported on various platforms and gives better video quality and playback, WMV boasts a smaller video file size that's best for online streaming. However, you are not limited to one video file format, and you can easily convert your files for convenience.

The best video converter, EaseUS Video Converter, works efficiently at 30X faster speed and manages batch conversion in high quality. Moreover, it goes beyond AVI and WMV to support the conversion of over 1000 multimedia formats. Try this software, and you will get 100% file quality preserved with this easy-to-use converter that can process videos up to 8K. 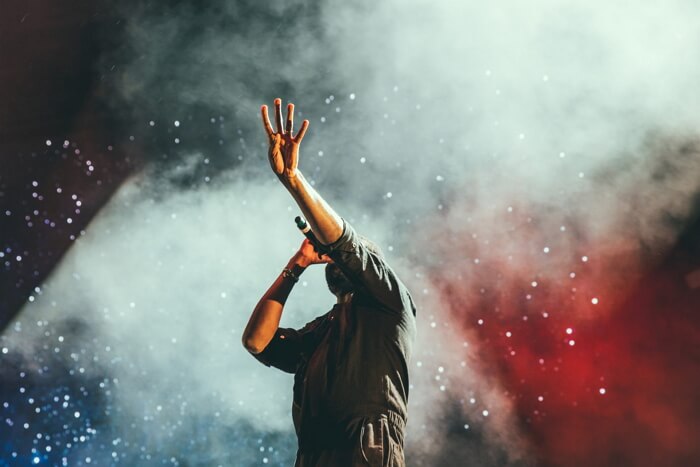